The effects of both theories are far from our daily experiences. Even with the most modern propulsion systems, we move with velocities far below the speed of light; and the mass of Earth curves spacetime only such that we stay on the ground. The effects of general relativity become apparent only if big masses are concentrated in small regions. The most extreme example is a black hole, where the curvature of spacetime is so strong that even light cannot escape.

Here, computer simulations help by providing visual access to both theories. Phenomena like aberration of light, length contraction or bending of light can be experienced. Hence, we obtain an intuitive access to special and general relativity.

Observer is moving with 90 % the speed of light. 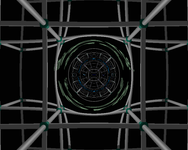 View through a Morris-Thorne wormhole.

The most natural technique for relativistic visualisation is ray tracing. Particularly, the finiteness of the speed of light has to be taken into account when extending the ray tracing methog from three to four dimensions. Additionally, we have to consider the frequency-shift caused by the Doppler effect and gravitational fields, bending of light due to the curved spacetime as well as light amplification. Four-dimensional relativistic ray tracing delivers high-quality images, however, it is very time consuming and thus, in general, not suitable for interactive visualisation.For special relativity, image-based methods and polygon rendering are two techniques that make interactive visualisation feasible. Both methods make use of modern graphics hardware for either an image-space or an object-space transformation. However, there are limitations concerning the scene and the motion of objects with both techniques. A recently developed third method combines polygon rendering with local ray tracing and thus circumvents the shortcomings of the underlying methods.For general relativity, interactive visualisations are possible only by means of analytic solutions of the equations of motion for light or particles. In case of a highly symmetric spacetime geometry, simple scenaries can be visualised with interactive frame rates by means of precalculations and tabulating.