The digital photography has replaced its analog predecessor which is based on chemical processes step by step. The advantages of digitally recorded photos are not only expressed by the easy means to store and duplicate photos but also by the possibilities for enthusiastic photographers to post process their pictures. Contrast adjustments or an automatic white balancing can be done on any PC without requiring special knowledge from the user. But there are limitations to the post processing set by the photo taking mechanism. The parameters of the optical set-up, e.g. the focal length of the zoom lens, cannot be altered or recalculated post hoc. Digital cameras are subject to the same restrictions in these aspects as their analog counterparts in this respect. 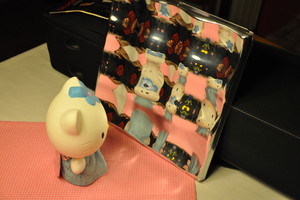 The research field called computational cameras tries to circumvent the limitations of the conventional digital photography. The fundamentals of this research are based upon the definition of a plenoptic function which describes the transportation of light with all the parameters relevant to human perception. The function which simplifies this plenoptic formulation to a four dimensional approach is called a light field. Using this light field function it is not only possible to display the distribution of the intensity but also the direction of the incident light. The camera can be interpreted as a sensor system which records a two dimensional slice of the 4D light field function. In order to sample the whole light field with an conventional camera, multiplexing techniques in the temporal or spatial domain have to be adopted. Further information can be obtained from the recorded data applying an algorithmic processing.

Our approach for recording a light field is based upon the deployment of mirrors in an elliptical setup. In contrast to light field recording systems which incorporate various lenses, the mirror concept enables a smooth sampling of the light field. Another advantage is given by the possibility to use a an ordinary camera which provides a very cost effective implementation.

Furthermore it is feasible to conduct a dynamic light field recording with an established optimal mirror setup. This will permit to record nearly the whole light field of an object. Still adequate procedures have to be investigated which allow an efficient and quick light field sampling, for example by modifying and extending methods used in optical flow analysis.

There are three main research topics identified inside the project: